Frequent Adventure Bus traveler and guest blogger
“Grandest of God’s terrestrial cities” is what naturalist John Muir (1838 –1914) said of Grand Canyon. Formed by the beautiful and powerful Colorado River and designated as a National Park in 1919, Grand Canyon is referred to as one of the Seven Wonders of the Natural World. 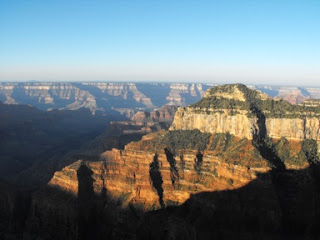 On my Best of the National Park tour with Adventure Bus, we visited the North Rim of the canyon which has a 1,000’ higher elevation and only 10% of the crowds than that of the South Rim. The higher elevation makes for cooler temperatures and affords stunning views across the canyon – all with no crowds! We woke up early to watch a spectacular sunrise and were amazed at how the canyon comes to life as the sun illuminates the multi-colored layers of rock exposed by millions of years of erosion.
After viewing the sunrise and watching the hummingbirds, we went back to the bus for yet another awesome breakfast and to hear our options for the day which were quite varied. We could spend the day walking the trails along the rim, take a hike down into the canyon, enjoy a ½ day mule ride into the canyon, or just relax on the porch of the beautiful stone and timber lodge which is perched on the edge of the rim and take in the view. I chose to walk the Transept Trail with some others and we spent our time taking photos from the rim. We then came across the General Store in the North Rim campground where we bought some snacks and souvenirs. From there we headed back via the Bridle Trail, had a delicious lunch in the North Rim Lodge and lingered on the porch taking in the enormous expanse of the canyon until it was time to move on to our next destination. 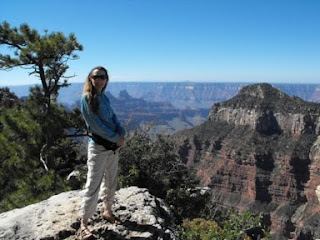 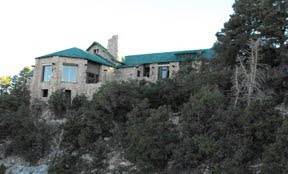 Wildlife is abundant and the canyon has 70 species of mammals, 250 species of birds, 25 types of reptiles, 5 amphibians and 17 species of fish. Besides plenty of mule deer, we were lucky enough to see a Kaibab Sqirrel which is only found in the ponderosa pine forests of the North Rim and surrounding Kaibab Plateau and no where else on Earth! Other animals you may see are: endangered California Condors, chuckwallas, horned toads, plenty of songbirds, butterflies and even rodents like the kangaroo rat who survive without ever taking a drink of water. 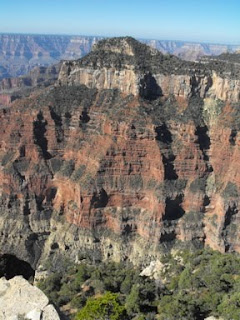 The plant life here is also diverse over with 1800 species of trees, fungi, mosses and wildflowers. Some of these include Pinyon Pine, Gambel Oak, Mountain Mahogany, yucca, agave, cliffrose, sagebrush, Mormon Tea, and prickly pear cactus.
This tour was my first with Adventure Bus and as a solo traveler it was the perfect way for me to have a safe, sensibly priced vacation that actually went to the places I wanted to see while giving me the opportunity to camp and hike. I made some great friends who I am still in contact with many years later and have been fortunate enough to have traveled with them again on “The Bus” because I keep coming back every year! I always recommend Adventure Bus and this tour because besides being an awesome way to travel, you’ll learn more about the natural history, the people who call this spectacular area home, and see for yourself the wonders of this Grand Canyon!
Explore Grand Canyon with Adventure Bus on the Best of the National Parks or Grand Canyon and the Wild West tours.