Dice the onion and cook in a large pot with butter until translucent. Peel and dice the potato, add to the pot. Add enough water to just cover the potatoes and boil until just cooked. When the potatoes are soft, add in the chicken broth and half and half. Remove a cup or 2 of the liquid, whisk in flour, and add back to the pot. This will thicken the chowder. Add more if you like it thicker. Sprinkle with seasoned salt. Chop the salmon into flakes and add to the liquid. Stir in the white wine and simmer on low, being careful not to scald the bottom. Serve with biscuits, saltines, or oyster crackers.

We first served this chowder in La Push, Washington on our Washington Coast to Cascades tour. We made it with sweet walla walla washington onions, local potatoes, and salmon that was smoked by a local Quileute Native American. We were camping right on the beach, so we listened to the crashing waves of the Pacific Ocean while we dined. We liked it so much, we’ve learned to smoke our own salmon and plan on making it on many more tours! 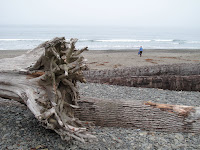 Life on the bus